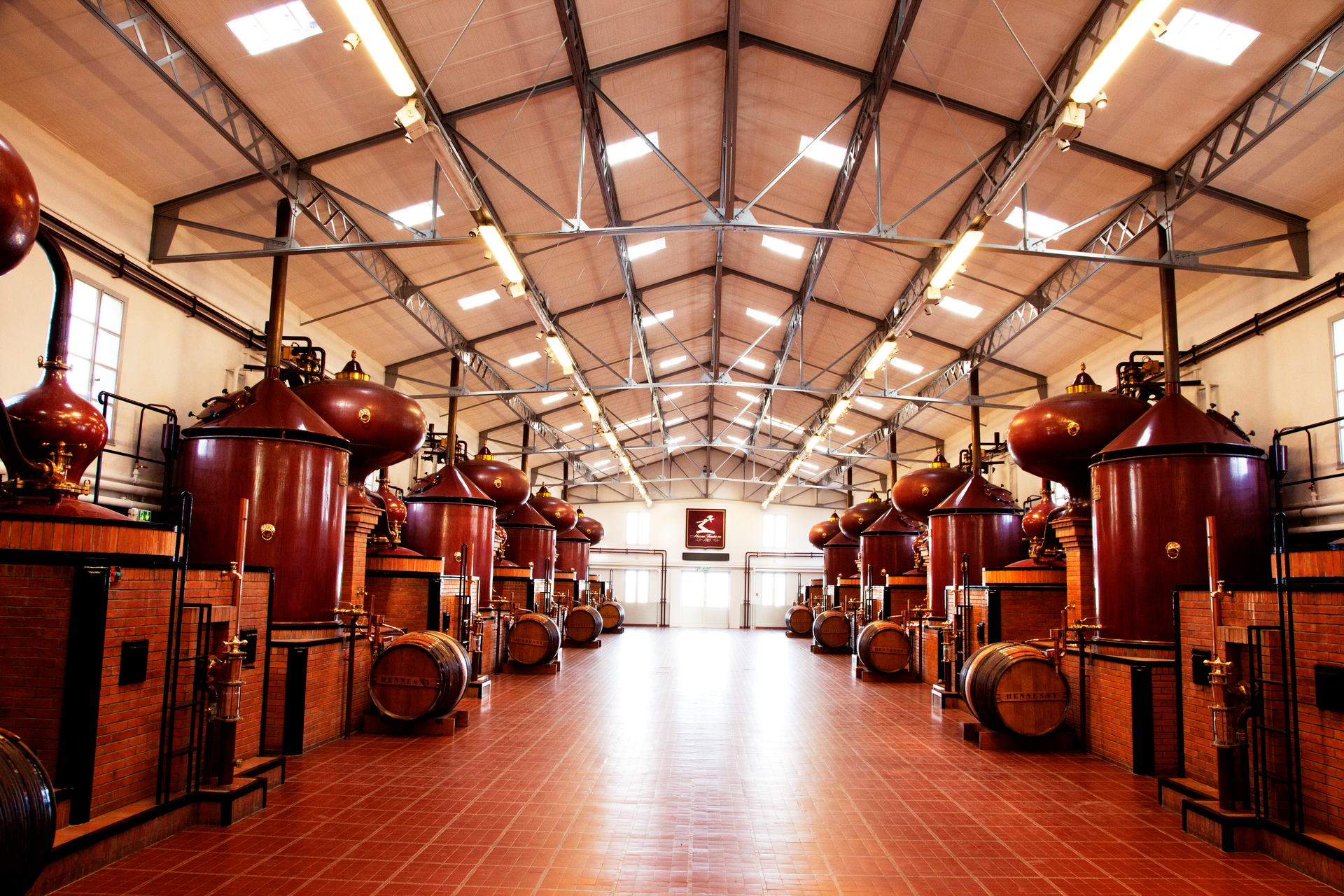 Whisky has become so popular in Israel. Bars have long lines of different age expressions of the famous brands. Feinschmeckers boast about the latest single malt they have bought in Duty Free. Many have forgotten its rich cousin called brandy, that is no longer prominent on the bar, or top of the list for connoisseurs. Certainly, in Israel, anyway. They are both distilled products that reek of heritage and quality. Whisky is distilled beer made from grain, whilst brandy is distilled wine made from grapes. They are both distilled in a pot still and matured in barrel. However, in America and China, brandy, particularly in its noblest incarnation, cognac, is more popular than ever.

I was reminded of brandy when I visited a recent pop up bar by Hennessy Cognac in one of Israel?s hippest Tel Aviv nightclubs. Now of course, all cognac is brandy, but not all brandy is cognac. Cognac is a little town in western France which contains the best brandies in the world. Hennessy is the royalty of the Cognac brand. It is part of the LVHM luxury group, that owns Moet et Chandon, Krug, Dom Perignon, Chateau d?Yquem, Chateau Cheval Blanc, amongst many others. Hennessy is the world?s largest selling Cognac with 50% of the market. It was founded in 1765 by James Hennessy.

The market is dominated of the big four: Hennessy, Martell, Remy Martin and Courvoisier. I visited Martell a few times in the 1980?s, because the company I worked for in the UK sold their cognac and visited Remy Martin with colleagues from the Golan Heights Winery in the 1990?s. We noticed the vineyard planted at the distillery. Those who visit the Golan Heights Winery today, should know the idea of the vineyard in front of the winery gates, stemmed from that visit.

I attended a tasting conducted by Hennessy brand ambassador Benjamin Smith. He explained how the Cognac region is made up of six wine regions, also known as crus, growing white wine grapes. Cognac is a protected and revered area. One kilometer outside demarcated region, and the resulting spirit has to be called brandy and not cognac. Smith told me it is the largest white wine growing region in the world. The main grape is Ugni Blanc, otherwise known as Trebbiano.? Ugni Blanc was in Israel and used pre-State to make white wines. The white wine is then double distilled in a pot still. The resulting eaux de vie (a clear distilled spirit) is selected, put in oak casks for maturation and then blended by the master distiller ? blender. As Benjamin Smith described it, the challenge is to make a consistent cognac, using what are by definition, inconsistent ingredients.

There are three basic levels of cognac. VS (Very Special) Cognac is aged for a minimum of 2 years, but is? more usually between 3 and 7 years. VSOP (Very Special Old Pale) is matured for between 4 to 15 years and XO is from 12 to 30 years. The Hennessy VS Cognac I found fruity, spirity and focused. The VSOP was deeper colored, smoother, with caramel and vanilla notes. The XO was richer, broader flavored, with a dried fruit character. The VS is I suppose more an aperitif or bar cognac, for drinking, or adding a mixer, like ginger ale, soda or lemonade. The VSOP and XO are better for after dinner, sipping through an evening with good friends.

Of course, as the base product is wine, there is a problem of Kashrut for the kosher consumer. There is however, now in Israel a cognac called Dupuy, which is kosher. Of course, most Israeli brandies are also kosher.

Here, there has been a long history of brandy production and consumption. If you have a surplus of grapes you have a few options. You can make grape juice instead of wine. You can sell the grapes, eat them, dry them to make raisins, or just let them fall unpicked. Or you can distill them. In 1898 Carmel started distilling the excess to make brandy. This was Israel?s first entrance to commercial distilling. Previously the only spirits produced were rustic arak, vodka, schnapps and eaux de vie made in rudimentary domestic stills. Carmel?s main brand of brandy pre-State was Extra Fine. This was a great value, fruity two star brandy, in something like an Armagnac bottle, that kept its original label virtually until its demise, in the 2000?s. Out of all Carmel?s brands, the label of Extra Fine was the oldest and longest lasting.

In 1938 a company called Stock started to produce brandy in Ramat Gan. Their Stock 84 was a best seller then, and has remained top of the charts ever since. Stock was founded in 1884 by an eighteen year old, Lionello Stock. The Jewish owned company settled in Trieste and was a great success until the rise of Hitler & Mussolini. Then the distilleries were pillaged, closed or nationalized. Because of this, Lionello Stock, had to rebuild his company again towards the end of his life and chose to make a start in other countries like America ? and Israel.

Stock combined with the partner WEST producing wine and spirits (Stock Brandy, Keglevich Vodka, Monfort wines etc). When it went bankrupt in 1988, Barkan grew out of the ashes to become Israel?s largest winery. They still produce Stock Brandy under licence. The brandy in Israel has always resembled fire water to me. It is popular with those that like an alcoholic bite, but less for those seeking a fruitiness and smoothness. However ever since its introduction to Israel, it has always been the largest selling domestic brandy.

After the founding of the State of Israel, an entrepreneur began to produce Richon 777 Brandy. The spelling reflected the French spelling of the word Rishon. 777 was chosen because of the importance of this number in Judaism, but also as a marketing gimmick to counteract Stock 84. It was soon taken on by Carmel, and became associated only with them. It was always a good drinking brandy, fruity, well balanced with a rich finish. It also was also good value.

Only just over twenty years ago Israeli brandies won the two biggest prizes for quality brandy then available. Jonathan Tishbi Brandy and Carmel Brandy 100 won the IWSC Trophy as ?Best Brandy Worldwide? at the International Wine and Spirits Competition in London. Tishbi had purchased an authentic alembic still from Remy Martin and Carmel 100 was originally made to celebrate that winery?s 100th anniversary. In 1996 I worked for the Golan Heights Winery. Due to a distribution agreement, I was also export manager for Tishbi Winery. So, I was there in the magnificent Guildhall in London, dressed like a penguin in bow tie and tuxedo, when Tishbi was presented with its trophy for brandy, and the Golan Heights Winery won the trophy for its sparkling wine. It was a uniquely proud evening for Israel.

Then having reached the heights, the local brandy scene crashed. High taxes, the opening of import barriers and the rise of malt whisky destroyed the Israeli brandy market. Carmel?s very last product produced from Rishon Le Zion Cellars was a rare expression Rishon Brandy, made from components matured between 15 and 30 years. I developed the concept and designed the label. It was my last contribution as a Carmel employee. Jonathan Tishbi Brandy, Rishon Brandy, and both Carmel Brandy 100 and Brandy 120 are exceedingly rare. You may be lucky to find one languishing in a wine store or at the winery shops, but they are likely to be expensive. The days of quality Israeli brandy is but a memory.

Rishon Le Zion Cellars is now closed and lies forlorn. The memorable brandy cellar with its wooden slatted roof, that used to be full of Limousin casks, is cleared and emptied. Even the wonderful rich angel?s share aromas that came from evaporated spirit, are now over taken by aging damp rot and a dank, dirty dust. Israel?s most historic winery is now a memory. In practice, it is a rundown car park where you can leave your car for ten shekels a day!? As for the beautiful old copper stills, they were sold for scrap. Tishbi?s Alembic Still lies virtually unused, but at least tourists can see it. Today only the thin, fiery concoction of Stock 84, has survived.

There is light at the end of the tunnel. New boutique, artisan distilleries have been founded. The best is the Julius Craft Distillery. Located in Kibbutz Hanita in the Western Galilee, they produce fine eaux de vie from local ingredients. They also produce a quality brandy called Jullius VI Brandy, distilled from Colombard and Viognier grapes. It is young though, and brandy needs the magic of time. There is also a jewel in an unlikely place. The Cremisan Monastery Winery in Beit Jalla, found an errant cask which was under the radar for thirty five years. It has now been bottled. Latroun Monastery also has a good brandy.

When I first came into this trade, cognac was tasted in brandy balloons, and old fogeys would heat the brandy before sipping. They would never have organized a tasting in a night club. Today, the world is different. The straitjacket is gone. The way you choose to drink cognac is acceptable, whether you add a mixer, use it as a component in a cocktail or add ice. The glass used is open for personal preference. No-one says anymore ?this is how you should enjoy cognac.?

Personally, I prefer to drink brandy in a thistle glass. This best concentrates the fruit aromas. With wine, one swirls the wine to aerate it and then puts one?s nose in the glass. With brandy it is better bring the glass vertically to and from one?s nose, nosing carefully to find the optimum position where you are able to identify the fruit without interference from the alcohol.

Now, even the cognac houses are keen to push the cocktail envelope. Hennessy asked our own, world famous Imperial Craft Cocktail Bar in Tel Aviv, to invent some Hennessy cocktails. I tasted them and the best was the chamomile infused Hennessy VS with genevre, lemon, pineapple syrup and Ardbeg mist.

Samuel Johnson had no doubts. He was quoted as saying: ?Claret is the liquor for boys, port for men; but he who aspires to be a hero must drink brandy.?

When you look at the bar or shelves of the wine store contemplating what to buy, and your eyes are drawn to all the whiskies, don?t forget to consider the slightly forgotten cognac or brandy, where the history is as rich and the quality no less good.