THE ONE AND ONLY

Yair Haidu has the respect of the Israel wine trade. 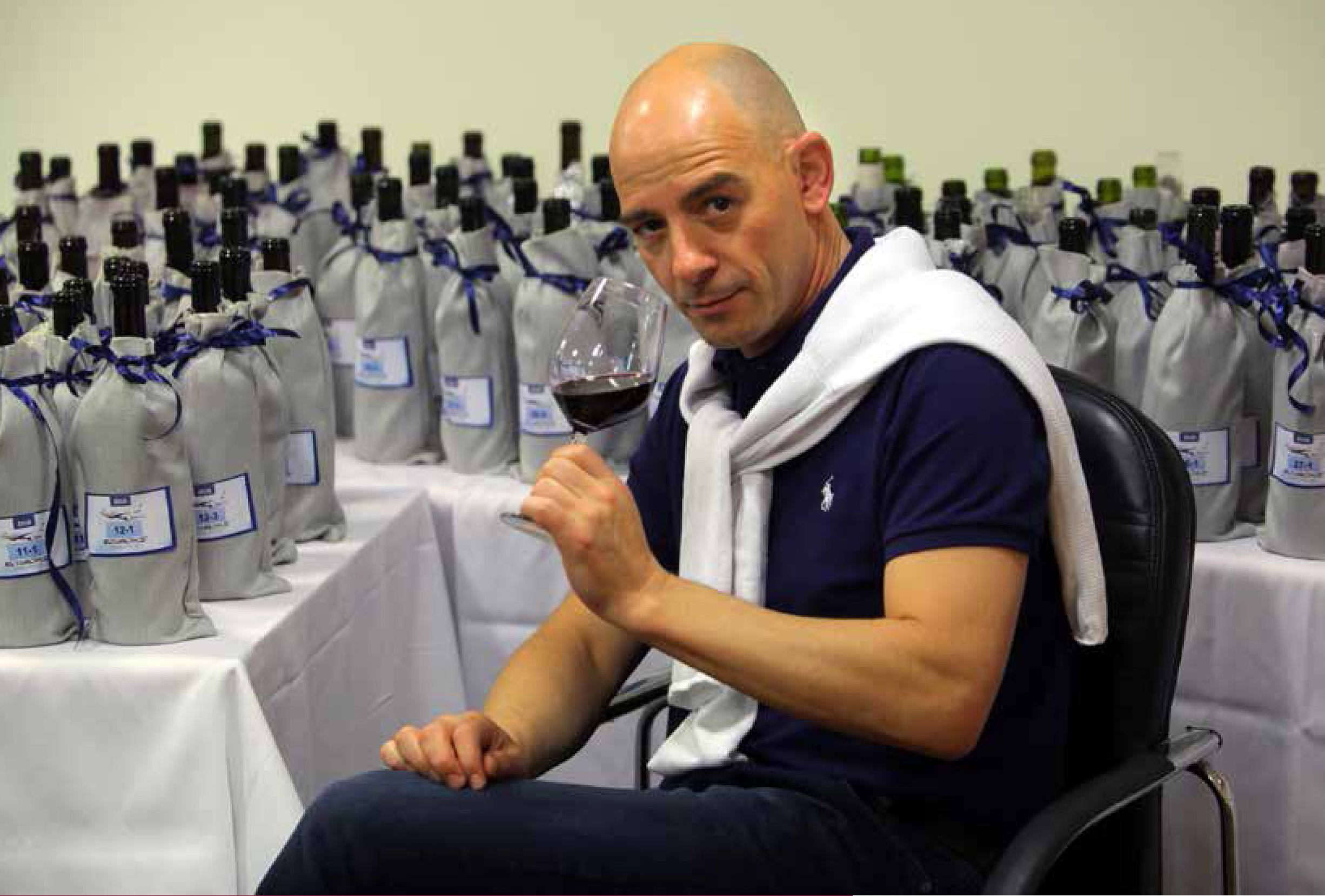 I first met Yair Haidu in 1994. He was then a tour guide with a focus on wine, who led a memorable visit of all the Golan Heights Winery employees to Bordeaux and Cognac. This role of ?wine tour guide? combined his love for sharing, his deep store of knowledge and what was for him a growing interest in wine.

He was then tall, thin as rake, with cropped spiky hair, round rimmed glasses, and a broad cheek to cheek, post box smile. He was a great raconteur, loved telling a story, was witty, enjoyed a laugh and how he loved to talk?.not a bad quality in a tour guide! He was relatively new to wine, but steeped in culture from the cradle, fiercely intelligent with a passion to learn and absorb knowledge. In the army he had served as a tour guide and this was a first career initially only in Israel, then later in France too, all the while graduating more and more towards wine, attracted like a moth to a flame.

Fast forward a decade or two and Yair Haidu is arguably the number one wine expert in Israel. Yet he is not a winemaker and does not work for a winery. He is neither a sommelier in a restaurant, nor is he a wine critic. However, he has the respect of the entire wine trade, particularly in Israel and Europe, as someone with unique knowledge, understanding and experience. He is famous for being who he is, more than for his achievements. The person it seems is greater than the sum of his career parts. His image is built on his persona, his character, his knowledge and his manner. The way he uses his strengths and how he interacts with people is why he has arrived at the pinnacle of Israeli wine.

His first main wine position was as manager of the Israel Wine Academy in 1996.The Golan Heights Winery wanted to establish a wine school, Yair Haidu was approached to manage it. If the truth be told, the Israel Wine Academy was not a great success. The idea was ahead of its time and maybe it was too ambitious for a winery to open a wine school, but Yair Haidu used the position to the maximum benefit to establish himself as an impressive figure. He was on the Israeli wine map.

After the Wine Academy, he joined Riedel, as the regional manager for Europe in 2000. Riedel of course is the most famous wine glass company in the world. This opened the doors of the wineries of Europe and established him as figure in the wine world. Yair Haidu began to build an international reputation. He was even selected to participate on the tasting panel of La Revue du Vin, France?s most important wine magazine.

In 2013, when El Al Airlines wanted to upgrade their wine package, they approached Yair Haidu and he became their wine manager. He selected the wines, trained flight attendants, introduced an innovative ?wines of the month? program and wrote informative wine lists, which won awards. His other major project in the last decade was becoming Brand Director for Nude, a line of designer glassware especially created by Haidu on behalf of the Sisecam Group, in Turkey.

Yair Haidu is also somewhat of an enigma. There should be numerous articles about him, but most of what I found when researching were shallow press releases. I have known him for 25 years, but I wanted to scratch beneath the well-polished surface and find out what I did not know, so we arranged to meet. Even though I have been around a long time, I found our discussion fascinating and absorbing. I was writing frantically while he talked. It was rather like a wagon of ripe fruit passing you by, and you grab what you can.

When you meet Yair Haidu, he is impeccably dressed, usually smart casual. He may be wearing a tight-fitting blue cardigan, a white shirt, narrow jeans, occasionally with a white scarf or sweater thrown strategically over his shoulders like an ornament. He leans forward with a slight bow of the head when he meets people. He is instinctively friendly, unfailingly courteous, with an old world, European politeness. You almost expect him to click his heels like an Austrian Count when he shakes your hand.

I asked him where his interest in wine came from, and he went back to his childhood, when from the age of 10 he would dissect the ingredients of the dishes cooked by his French mother. He was always acutely aware of tastes and smells. His father was the famous Andre Hajdu, the Hungarian Israeli classical music composer, recipient of the Israeli Prize. Yair, who was bought up as religious, was one of six children. It was a trip to Paris just before the army, that opened a door in his mind regarding wine. He was immediately attracted to the wine culture, the dust on the bottles in dusky cellars, the wine talk, the atmosphere and the people. He began compulsively buying and collecting wine. He remembers purchasing wines like the Yarden Cabernets of 1985/6, Carmel Private Collection 1988 and the Herzl edition from Askalon-Segal.

He studied philosophy at the Hebrew University and thought that an academic career beckoned, possibly focusing on philosophy, art or history, but wine nudged them aside. The wine that really pushed him through the door was a Ch?teau Figeac 1959.? This was his epiphany wine.

When talking about wine, his eyes light up and he trawls up from somewhere, memories of tastes of wines from way back. Jeff Morgan of Covenant Winery describes him as a wine impresario: ?I have sat down with Yair and was left with the feeling he knew my wines better than I do.? He has an intense curiosity, prodigious memory, a very well-developed tasting ability, and the imagination and vocabulary to vocalize it.

He describes Israel?s wine evolution and revolution this way. The 1970s was the rebirth of Cabernet Sauvignon. The 1980s represented the move to the mountains. In the 1990s small was beautiful. The 2000s was a decade of international education. In the 2010s Israeli wine discovered the Mediterranean. As for the 2020s, this will be the era of terroir and authenticity.

When I asked about grape varieties, he said these are the least interesting things in the discussion. He used Sancerre and Chablis as examples of regions, where the place and terroir, ends up offering added value over and above the grape variety (respectively Sauvignon Blanc and Chardonnay.) He went on to explain that Cabernet Sauvignon was a commodity. It could be NIS 50 or $5,000. The heritage of place is far more important than the variety. He clarified ?Wine should express a site and a person.? As for grape varieties, he said they are like musical instruments. It is what you do with them and how you use them that makes them relevant and interesting.

He salutes visionaries like Shimshon Welner, Segev Yerovam, ex CEO?s of the Golan Heights Winery (?in the 80?s and 90?s the Golan was the most significant locomotive in the wine revolution?), and trail blazers like Yair Margalit, Eli Ben Zaken, and Roni James, respectively of Margalit Winery, Domaine du Castel and Tzora Vineyards. Talk to him about any wines from 1976 onwards, and he will have an enlightening opinion honed from his experience and tasting abilities. If you want to find out how wines like Ben Ami 1977, Carmel Special Reserve 1976 and Yarden Cabernet Sauvignon 1984 taste like today, he is your man. There is no-one quite like him for tasting and remembering.

He lauds the unprecedented talent of today?s winemakers. He particularly admires winemakers like Gabi Sadan (Kerem Shvo) and Uri Hetz (Chateau Golan) for their search for authenticity and for making wine without embellishment. He also greatly respects Eran Pick MW (Tzora), Ido lewinsohn (Barkan), Asaf Paz (Vitkin) and Itai Lahat (Lahat). He explained to me there was a short path to make a good wine, but he prefers the longer path to make a great, more authentic wine.

Yair Haidu?s latest initiative is an innovative, new start up called Cheers. This is a concept designed to sell a ticket to the wine world and to empower the wine drinker. Prospective customers are invited to complete a clever questionnaire, from which Cheers will ascertain their taste profile. They will then select wines, designed to fit the customer?s needs, knowledge and curiosity. At a cost of NIS 350 a month, the customer will receive a surprise gift box of three wines, personally matched to their needs. Along with the wines they will receive an A4 page telling the story of the wine and winery. Yair Haidu sees himself as a story teller, helping the customer navigate this strangely inaccessible world. The idea is an ongoing journey of discovery, exploration, entertainment and experience.

He tastes 150 wines a week to find suitable wines in the NIS 110-150 category. ?This is a sweet spot where we can find wines to surprise, which we are prepared to stand behind.? Haidu says they are trying to connect with the wine drinker. He aims to build a bridge, create trust and have an ongoing conversation. Certainly, wine lovers and connoisseurs alike, and anyone who wants to learn, should pause to consider what Cheers is offering.

One of the most impressive things about Yair Haidu is that he tastes quietly, with concentrated curiosity in his eyes. He does not boom and pontificate like so many wine experts do, but gives his opinion more like an excited child. With apologies to Winston Churchill, maybe this wine expert with a Hungarian name is still an enigma, wrapped up in French joie de vivre, blended with Israeli creativity. He remains an outsize character inside the cocoon of Israeli wine culture. However, what he has to say and his method of delivery fascinates rather than alienates.? If wine is on the menu, his opinion or view is always worth hearing.

The writer is a wine trade veteran who has advanced Israeli wine for nearly 35 years and is often referred to as the English voice of Israeli wine. www.adammontefiore.com

Times they are a’changin

THE VERSATILITY OF THE VINE

LOVE IS IN THE AIR

PRESERVING THE OLD AND ON WITH THE NEW

Binyamina Winery, founded as Eliaz, is celebrating its 70th anniversary.

Recommendations for the Festival of Shavuot.