The cradle of wine culture was in the Eastern Mediterranean. In ancient times and Biblical times, the wine drinker would have been quite familiar with wines from places where today’s Cyprus, Greece, Israel, Lebanon and Turkey are situated.  After the golden age, the region made pretty awful wine for 2,000 years, or at least during the periods there was not prohibition. However in the last twenty years there has been a revolution in quality. Each of the East Med countries is making the best wine they have made for thousands of years and it has become a very dynamic, quality driven wine region.

These countries have proved quite successful at conveying the message of their new quality. They all have their spokesmen, their prime communicators whether they are winemakers, sommeliers, wine writers, critics or wine educators. They have had their moments of strife, even war. Turkey and Greece, Israel and Lebanon are not bosom pals by any measure. However, at least on the wine lists, wine shelves or importer-distributor catalogues, these countries should be united, being listed together under the heading ‘Eastern Mediterranean’, instead of woolly, uninformative shelf strip signs saying ‘Others’ or ‘Rest of World’.

Furthermore, if Armenia and Georgia were to be added to the East Med countries, the signing could be changed to ‘Ancient World.’ The East Med or Ancient World are collective descriptions which will interest sommeliers, retailers and wine lovers in the big wide world. The mosaic of the countries, which are so different, yet in some ways similar, will be more attractive together on the shelves, than standing alone. The whole is greater than the sum of its parts.

As a lover of food and wine from each of the countries, it is fascinating to learn more about them. Certainly, as far as we are concerned, Kosher is not a country and Israel is not an island. We are part of the East Med Wine Region. We in Israeli wine should occasionally look around, sniff the air and prick up our ears. We should explore, taste and learn from our neighbors. After all, it was not so long ago we were all together as part of the Ottoman Empire. Think of the information we could all share about local indigenous varieties preserved under the Ottomans!

Turkish wines are good these days and there is so much happening. This is a country full of interest to the wine geek because of all those unpronounceable varieties, yet who would know?  There was the plucky Guide to Turkish Wines written by Seyla Ergenekon, but that was published in 2008. The new Turkey with regard to wine is developing so fast, that it is already way out of date. The winery consortium ‘Wines of Turkey’ was a shooting star, which was outward looking and marketing orientated. However in my experience, certainly in my reincarnation as a wine writer, the Turkish wineries are appalling at public relations (maybe excluding Kayra Winery’s charismatic Daniel O’Donnell.)  They don’t respond to queries or appear to have any interest in providing information. It may be the language barrier, the local restrictions on alcohol marketing, but it is also possibly a state of mind. Of all the named countries, I believe Turkey hides its light under a bushel more than the others.

Cometh the hour, cometh the man…or woman! A new wine book has just been published, which will fill in all the gaps in your knowledge about Turkish wine. It is a large coffee table style book, called “The Essential Guide To Turkish Wine,” written by Turkish wine expert and enthusiast, Andrea Lemieux. The book is packed with information written in a friendly, unsnobbish way, and it is beautifully and brightly illustrated. It goes back deep into history, covers the wine regions and has visual explanations about the different grape varieties. It lists details of wineries, large and small, divided into eight regions. It even has a section on Turkish pronunciation. Good luck with that! It is an easy read and does not get lost in uninteresting detail. It will soon be available on Amazon. Andrea Lemieux is an American living in Turkey who has become infatuated with Turkish wine. She has studied the local wines, visited the wineries, experienced the wide climatic difference of the different regions, and studied wine at WSET courses in Turkish! She runs her informative, lively blog on Turkish wines, called thequirkycork.com and has also been published on Jancis Robinson MW’s website. She is articulate, knowledgeable without being in the slightest bit arrogant and is eager, even hungry, to continue learning more. There are many very knowledgeable Turkish wine professionals, winemakers, educators and ex-pat sommeliers. However, what is lacking is an English speaking ambassador, seeking to fill us all in with the great things happening in Turkish wine. Andrea Lemieux is that person and her book is invaluable. It is heartily recommended. As for those looking for information on East Med wines, this “Essential Guide To Turkish Wines” is the missing link! Adam Montefiore is a winery veteran turned wine writer. He is referred to as the English voice of Israeli wine and is a fervent advocate of Eastern Mediterranean wines. He is the wine writer of the Jerusalem Post. www.adammontefiore.com 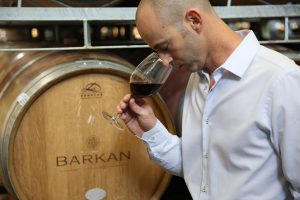 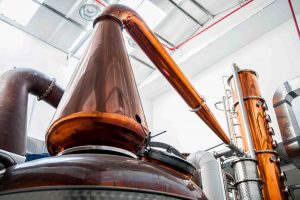 I am a Zionist sort of guy. I like supporting Blue & White products. My choice of beer for many years was Goldstar. For 100 years Carmel was the national wine, until Yarden came along. With regard to Israeli spirits, it has always been more difficult to be patriotic. When I came to Israel there were such delights as Lord Gin and Captain Rum…