Binyamina and Zichron Ya’acov are two winery towns on the southern slopes of Mount Carmel, that have witnessed a 130 years of our modern wine history. It was here that Baron Edmond de Rothschild built a modern Israeli wine industry, first by planting vineyards and then by building a large winery. Binyamina is named after Edmond de Rothschild’s Hebrew name and Zichron Ya’acov, after his father, Jacob.

Today the area represents the most traditional, compact wine route in Israel, easily accessible from central Israel. A train journey to Binyamina Station can put you in the heart of the region. Within close proximity, there are wineries founded in the 1890’s, 1950’s, 1980’s and 2000’s. These include Carmel, Binyamina and Tishbi which are amongst the largest wineries in Israel and Margalit and Bar Maor which are some of the finest boutique wineries.

It is a great wine region to visit also because distances are relatively close between wineries and there are vineyards are all around, in Shefaya, the Hanadiv Valley and in Binyamina towards Givat Ada.

Kobi Arens is a son of Binyamina. He is a tall charismatic man, with blue eyes and a receding hairline. To me he looks like a dead ringer for Prince William. Imagine he is the slightly sturdier, elder brother. He has blue eyes and a warm, engaging smile. He was born and bred a farmer. The clue is when you shake hands. His hands are a farmer’s hands; large and well used.

His grandfather, Michael Arens from Riga in Latvia, was sent by his parents to Berlin to study to be a doctor, enough to fulfill the wishes of any Jewish mother. However, Arens had other ideas. He believed that working the land was crucial to building the State of Israel, so he left the course in the middle and went to Toulouse in France to study agriculture.

He made Aliyah in 1939 and in 1944 the family bought land to the east of Binyamina, towards Givat Ada. Gradually the Binyamina agricultural village became a town and expanded to absorb the new Arens holdings. It was classic agricultural entrepreneurship of the time. The fruit orchards, vineyards and olive groves were built on the family property. You walk out of the family house and their fields are spread before you.

As a child Kobi Arens, the third generation, remembers sitting on the trailer that carried the grapes to the Zichron Ya’acov winery. The tractors would line up the hill to the entrance to the winery. As a 16 year old teenager, Kobi would rush home from school to drive the last tractor of the day to the winery.

He was someone really born in a vineyard. The secrets of the vine and vineyards, was something he absorbed with his mother’s milk. Instead of accompanying his father to the big football game, he would be out walking the vineyards, orchards or groves with him.

The wine buzz came later. His wife was an air stewardess with El Al and they got the opportunity to visit California. Here in the first wine epiphany of his life, he was blown away by Napa Valley, the home of California’s wine industry, where viticulture, winemaking, wine culture and wine tourism were all intertwined.

Eight years later, he went on a study viticulture tour to Australia with a group of growers. When he arrived at Adelaide University, there was the second epiphany. He visited the university plant nursery, and saw the new winery for students. He met with the professor responsible for the oenology school and was immediately seduced into doing a post graduate winemaking program.

He returned to Australia with his wife and two young children, spent the time and did the work and added winemaking knowledge to his vineyard experience.

He returned and joined Carmel’s Zichron Ya’acov Winery in 2004 with the immense responsibility of making wine at Israel’s largest winery. He then became responsible for their new Upper Galilee winery at Ramat Dalton (today known as Kayoumi Winery) and for the premium vineyards in the Galilee and Golan Heights.

After six years, he returned to work in the family farm. He had previously made his own wine for fun, but in 2010 he starting his own winery. (www.arens.co.il)

For him, growing fruit for wine is not a matter of observing from afar and speaking to a vineyard worker a few times every year. For the grower winemaker, everything that happens, every storm or burst of sunshine is intimate and personal. It affects him and his vines, one and the same. For his mission is not just to grow grapes, but to grow wine, and not any wine, but his wine, in his place.

I often need to remind myself that wine is an agricultural product. Once I hosted a big shot from the United States. We visited 13 wineries in three days, one after the other. I thought smugly that I had done a pretty good job. On the way back to the airport my guest punctured my self-satisfaction by saying: “you know we visited thirteen wineries…but not one vineyard!”

Of course, the vineyard is part of it. The person and the place are what gives wine uniqueness, character, and what makes it different from Coca Cola.

So many Israeli wineries use vineyards far from the winery and there are very few genuine estate wineries. However the Arens Winery produces wines that reek of person and place.

I remember once seeing Kobi Arens hosting a tour of Galilee vineyards, and I thought then, that he had the presence, intelligence and communication skills to be a great teacher. It is therefore wholly appropriate that he is also the winemaker for the Shefaya Winery, where students from the residential youth village learn the rudiments of wine growing and the wine making process.

His wines are a reflection of his raison d’être. He works with varieties suitable for the area and is committed to making the most of his terroir. He likes blends believing this the winemaker’s true art. His wines are fruit led, but elegant and he recoils from high alcohol, concentrated fruit bombs.

He also makes a fantastic olive oil made from high density planted groves. The varieties used are the Koroneiki and Arbequina, which are from Greece and Spain respectively. It is one of the finest boutique olive oils here, definitely better for drizzling on salads or for grilling fish, rather than for use in frying.

He is not trying to make the best wine in the world, but is trying to make a local wine. He is an experienced grower, talented winemaker and a salt of the earth guy. He only makes 3,000 bottles, but they are authentic expression of the person, his vineyards and of the Binyamina terroir.

The wines, (not kosher) and olive oil I tasted are as follows:

Arens Estate Red 2010
A blend of 66% Syrah, 17% Petit Verdot, 12% Carignan & 5% Mourvedre. Ripe berry fruit, chewy mouth feel, complimentary oak notes in the background. It has soft tannins and great balancing acidity. In the end, it is actually a refreshing wine in what I call the new Israeli Mediterranean style. Recommended.

Arens Estate Red 2011
A blend of 44% Syrah, 32% Mourvedre & 24% Petit Verdot. This is a sharper, more angular wine. Less openly fruity, more austere. It needs more time than the others, possibly even decanting.

Arens Estate Red 2012 (not yet released)
A blend of 55% Syrah, 17% Mourvedre, 16% Carignan & 12% Petit Verdot. Fruit forward compote of ripe plums and berries, meaty flavors but leading to elegance with a refreshing finish. Similar quality to the 2010.

Arens Mourvedre 2012 (not yet released)
Mourvedre is best in blends, but this has an elegant blueberry nose, a rubber, burnt match character and a pleasing refined finish. I think Mourvedre produces texture and tannin rather than automatically recognizable aromas, but this is one of the better Israeli versions I have tasted.

Arens Olive Oil, Extra Virgin, Cold Pressed
It has a herbal grassy aroma, is spicy and flavorful in the mouth with a hint of an attractive bitterness on the finish. It is worth a visit only to top up with olive oil! Give that man a goldstar

View PDF
5 MB
Goldstar is the beer of Israel. Story of a vineyard 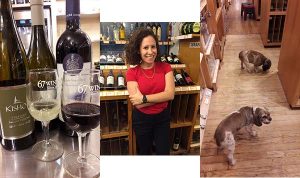