One can basically tell the story of Israeli fizz in three sparkling wines: The President’s, produced by Carmel Mizrahi, Yarden Blanc de Blancs made by the Golan Heights Winery and Raziel Brut Nature, a new expression by the Ben-Zaken family. The President’s was the dominant player from the 1950’s until the late 1980’s. Yarden Blanc de Blancs dates from the early 1990’s and Raziel’s new sparkling wine has not even been launched yet!

Israel’s first important sparkling wine was The President’s. Carmel is the historic winery of Israel, which created a wine industry here and kept it afloat for 100 years. During this long period, Carmel literally was Israeli wine. The winery was founded by Baron Edmond de Rothschild, owner of Chateau Lafite. The first vineyards were planted in 1882 and then the two largest wineries in the country were built with deep underground cellars. Rishon Le Zion Cellars was established in 1890 and Zichron Ya’acov Cellars, in 1892. The Zichron winery is a truly historic place and it remains the oldest factory building in Israel still in operation.

Carmel was the first Israeli winery to produce Traditional Method Sparkling Wine, another way of describing the ‘Methode Champenoise’, practiced in Champagne. It was an expensive undertaking needing a special work force as everything was done by hand. There was no market for expensive wine in those days, and certainly not for quality sparkling wine either. So they eventually stopped production. It was just too unprofitable. The interest from consumers was primarily for cheap pop wines, for use at weddings and family events. Corks were plastic, the wines were semi dry to semi sweet and they were made by what I call the Coca Cola method, with an injection of C02. There was no pretense of quality. The bubbles were big, frothy and dissipated quickly. By the time I joined the company in 1990, The President’s had been downgraded. It was Extra Dry, primarily from Colombard grapes and it was made by the Charmat or Cuve Close method. This means the second fermentation took place in a large tank, and then the wine was bottled under pressure. President’s was sold abroad as Brut Cuvée. In those days they used to write on the label that it was made by the Traditional Method. As an oleh hadash, a naive newbie, it used to infuriate me that the label was not the truth, but dishonest labeling was quite prevalent then. However sparkling wines were not large sellers. More popular was the lightly sparkling Fantasia, which was a very successful brand. By the time I returned to Carmel eleven years later, the President’s Sparkling Wine had been discontinued.

The winemaker specializing in sparkling wines was the appropriately named Koby Gat. (Gat in Hebrew means ancient wine press.) He was a Francophile, fluent in French and the agronomist of the winery, which then was by far the largest winery with 75% of the Israeli market. He was in the winemaking team first under Technical Director, Freddie Stiller, and later under Chief Winemaker, Israel Flam. The sparkling wines were always his responsibility. However he is most well-known for the wine courses he used to hold at Rishon Le Zion Cellars. Many people new to wine at this time, will remember him having studied at his courses. The only remaining clue of a classic method sparkling wine past, were the old pupitres (racks) which could still be found used for decoration in various corners of the winery. Now the winery is closed and forlorn, presumably they have all been thrown away like so much of Carmel’s history. However we do have memories. The President’s was a wine which was in a way historic, whilst at the same time representing mediocrity and a fairly low bar as far as quality is concerned. Certainly it was a representative of its time.

In 1991, Israel took a giant step forward to producing quality sparkling wine. As happened with every aspect of Israeli wine, the Golan Heights Winery was the pioneer who heralded the quality wine revolution.  They were the first to bring New World technology and winemaking expertise from abroad in the form UC Davis trained winemakers. They were the first to focus on high elevation vineyards and to ‘grow the wine’ in the vineyard. They also created a revolution in sparkling wine. They sent their young, new assistant winemaker, Victor Schoenfeld, to work for six months at Jacquesson Champagne to learn the secrets of the ‘Champenoise.’ At the 1996 International Wine & Spirit Competition in London, Israeli sparkling wine arrived on the international stage. Yarden Blanc de Blancs, then a non-vintage wine, won the Trophy for The Best Bottle Fermented Sparkling Wine. I was working for the Golan Heights Winery at the time and was present at the grand dinner at the Guildhall in London, when this prestigious trophy was presented. This high profile award was repeated in 2003 when Yarden Blanc de Blancs 1997, by then a vintage wine, won the same trophy. The 1999 vintage also won a prestigious trophy at Vinitaly of 2006. These prizes were to the immense credit of the Golan Heights Winery.  It showed that Israeli sparkling wine could truly be world class. Later the Golan Heights Winery even sponsored the trophy it had won twice at the IWSC. It became known as The Yarden Trophy For The Best Bottle Fermented Sparkling Wine.

Today, sparkling wines such as The President’s, Brut Cuvée, Yarden Brut and Gamla Rose are history. The Yarden Blancs de Blancs (Brut), made from 100% Chardonnay, is the survivor from those early days. Today, they also produce Yarden Rose and Gamla Brut, both world class wines, but the best example of Victor’s skill is the Yarden Blanc de Blancs, which is aged on its tirage yeast for no less than five years. Now, there is a new addition, a rare, occasionally produced prestige sparkling wine called Yarden Katzrin Blanc de Blancs, Late Disgorged, which is aged on its tirage yeast for ten years before disgorging! However, the regular Yarden Blanc de Blancs is the standard.

If I may use basketball terminology, wine lovers may put Yarden red and white wines in the first five of similar wine categories in Israel. However, if we are talking about Yarden Blanc de Blancs in relation to other Israeli sparkling wines, then we are talking about Michael Jordan. This is the finest expression of the art of sparkling wine in Israel, possibly also in the whole Eastern Mediterranean. It is as good as any Champagne. Other sparkling wines are produced by the likes of Carmel, Pelter, Tishbi, and Teperberg. Some are made by the Traditional Method and others are made by the Charmat process.  As far as the Golan Heights Winery is concerned, it remains one of the most technologically advanced wineries in the world. Their pioneering, advanced technology and the setting of new standards in Israel are beautifully illustrated by the Yarden Blanc de Blancs.

In the last ten years, sparkling wine has taken off. Anything with bubbles is experiencing new popularity. This can range from lightly sparkling Moscatos, frizzante Lambruscos, Cavas from Spain and Proseccos from Italy up to the finest prestige Champagnes. The latest fad is for Pet-Nats. There is more interest in sparkling wine, which Israeli’s often call ‘Cava’, whatever it is. As a result, there are indications and whispers that more Israeli wineries are starting to make a base wine with plans for future Traditional Method Sparkling Wines.

The first and most exciting of these is to be launched any minute by Raziel Winery, which takes Israeli sparkling wine in a different direction altogether. This is a comparatively new winery founded in 2017 at Ramat Raziel, on the site of the Ben-Zaken family home. This was where Domaine du Castel, one of our very finest wineries, was situated until 2015. Through the successes of Castel, the owner-winemaker, Eli Ben-Zaken, taught us all about style, pursuit of quality, winery aesthetics and attention to detail. Castel was the most successful Israeli winery of the boutique winery boom and the pioneer of the Judean Hills. Raziel is a new initiative by the Ben-Zaken family and Eli Ben-Zaken’s new baby. The winery has already received rave reviews. Raziel Red recently scored 97 points in jamessuckling.com, the best score in the tasting alongside Castel Grand Vin! Talking about keeping it in the family!

The Raziel Winery is producing three sparkling wines made strictly by the traditional method. The first we will see is the Raziel Brut Nature – Zero Dosage NV, made from Chardonnay and Pinot Noir grapes. The focus here is on totally handmade, handcrafted wines. The fruit was aged in large 600 liter barrels. I have tasted and even bathed in the wine! On a visit to the winery, Eli Ben-Zaken opened a bottle for me, and then gave me the half-finished wine to take home with a regular cork used as temporary closure. The narrow windy road, going steeply downhill from Ramat Raziel, was more than the wine could take. There was a noise like a gunshot and I and the inside windscreen, were covered in Raziel’s precious cuvee. If you taste it rather than bathe in it, the wine is a beautiful expression of the sparkling winemaker’s art. In the same way Castel symbolized the boutique winery revolution in Israel, the Raziel represents the artisan approach for making a high quality sparkling wine here. The launch is eagerly awaited. You can actually tell the story of Israeli wine through these three wineries. Carmel, the Golan Heights Winery and Domaine du Castel span the history and milestone events. Arguably Victor Schoenfeld and Eli Ben-Zaken are the two most significant and influential figures in Israeli wine over the last thirty years. They not only led the Israeli wine revolution and but were also most prominent in bringing the Israel wine story to the world. As we approach New Year’s Eve, how appropriate it is that these same two people are responsible for making the finest Israeli sparkling wines in the last 130 years. The President’s, Yarden Blanc de Blancs and Raziel Brut Nature certainly tell a beautiful story……..and in a nutshell, it is the story of Israeli wine.

Adam Montefiore is a wine industry insider turned wine writer, who has advanced Israeli wine for 35 years. He is the wine writer for the Jerusalem Post and is referred to as the English voice of Israeli wines. www.adammontefiore.com 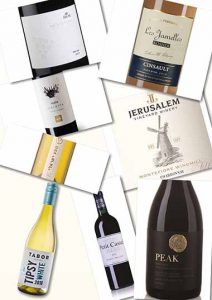 DON’T PASS OVER THE WINE

On Seder Night, we read the Haggadah, together with our close and wider family. It is a unique annual family occasion, at which wine plays 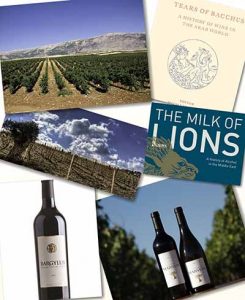