Israeli wine has always had a special place in its surrounding society. It has had the same relevance and prominence from the days of Ancient Israel in Biblical times, until now in modern Israel. In ancient times wine was a major industry and vines, grapes and wine were frequently used as imagery that people could relate to. Just read the Bible.

In modern times, wine still plays a crucial role. The settling of the country, the planting of vineyards and production of wine has helped develop the country. Time and again the farming villages or settlements have set the political tone. Wine was at the forefront at every stage of Israel’s history.

The vineyards planted in the 1880’s are an example. The idea of working the land and making it your own was adopted by the Labor Zionism movement. The fact that David Ben Gurion, Israel’s first Prime Minister worked at the Rishon Le Zion Cellars and Levi Eshkol, Israel’s third Prime Minister, managed the vineyards, only underlined the importance of wine as a symbol of the new Israel. When Theodore Herzl, the founder of Zionism, visited Israel in 1898 he was taken to see the Carmel Winery as an active example of the Zionist dream come true. Carmel developed and maintained a new Israeli wine industry through all the problems of building the state.

Wine was prominent enough an issue, to attract the intervention of politicians. When Joseph Seltzer from Hungary wanted to found a winery in 1952, he did so, on the site of a disused perfume factory in Binyamina. There were disputes about the approvals given and only when David Ben Gurion, by then Prime Minister, became involved was the issue solved and Eliaz Winery, now renamed Binyamina, was formed.

Political intervention was also apparent in the development of the Golan Heights Winery. The Wine Growers Cooperative was against it and they had a person of influence in the right position to lead the opposition. Pessah Grupper was the Minister of Agriculture, as well as being a veteran member of the Wine Growers Cooperative, and later the chairman. This time the future of the new winery was preserved only due the strong intervention of Ariel Sharon, then the Minister of Trade & Industry. He managed to secure the approvals to push through the move to its permanent premises in Katzrin.

Sometimes it was wine that put a region on the map. The positive attributes of settlement pioneering, Israeli agriculture and advanced technology combined in the Golan Heights Winery. The Golan area came to be very much associated with the success of its wines. Its Yarden wines gained international acclaim. Wine became the most visual export from the Golan Heights and undoubtedly contributed to the fact that this area, new to Israel after the 1967 war, was swiftly adopted by the Israeli consensus.

The area known as the Territories, (aka the West Bank by lefties or Judea and Samaria by rightists), was more politically fraught. I prefer to call it from a wine region point of view, the Central Mountains. Companies opening businesses there received favorable rates and inducements and Barkan Winery was founded there. Eventually the issue of the Territories became an issue. Barkan moved to a new winery in Hulda, became Israel’s largest exporter and close to the largest winery in Israel.

In the last ten to 15 years, there are a number of new wineries that have opened in the Central Mountains. It is in their interest to show the Israeli settler as placid farmer types planting vineyards and growing wine. Again, wine is at the center of the political issues of the day, but they are using wine and wine tourism in exactly the same way as Carmel Winery and the Golan Heights Winery were used to settle the country and the Golan before them.

Those with an anti-Israel agenda like the BDS, and the relabeling proposals of the European countries are doomed to fail if their objectives are to cause financial damage. Most Israeli wine is sold in Israel and most of what is sold abroad is channeled to the Jewish market. The late legendary wine critic, Daniel Rogov, put it very succinctly: “There are domestic and overseas customers who simply won’t buy the wine because it comes from the occupied West Bank.” He went on: “In contrast there are many others who will look out those wines precisely because they come from there.” Sales will not be affected. Maybe the bad press will even boost sales.

The main damage is one of image yet wine remains Israel’s most presentable product which represents the land, agriculture, technology and Israel’s creative energy. However bashing of Israel through wine is certainly not new. I remember the crisis when I represented Yarden and the London store Selfridges succumbed to pro- Palestinian protesters outside the store and delisted the wine. That was over fifteen years ago. Meetings were held with the management and the wine was reinstated. The similar issues with the Sweden’s Systembolaget and more recently the German store KaDeWe, also involved the Golan Heights Winery.

Only the most fervent, anti-Israel campaigners categorize the Golan Heights as politically problematic and yet it is included in all the propaganda as being part of the Occupied Territories. When people rage about the Territories and include the Golan Heights, their whole argument is undermined. Likewise it is a massive failure of Israel diplomacy that the Golan Heights still has this mark of Cain on it.

After all, the Golan has been annexed to Israel, there are no Palestinians there and the adjoining country is Syria, which is in the process of disintegration. Who do the critics want Israel to hand the Golan back to The hypocrisy of it all! It is not even in any western country’s interest that the Golan should go back to any of the existing players, but the blanket approach continues.

Many see everything in Israel as political, but at least wine gives you a glimmer of hope to present the most acceptable face of Israel. You don’t always receive the welcome I did when presenting wine to Polish sommeliers when one asked me: “Why should we sell Israeli wine when you murder Palestinian children.” They don’t teach you to answer to that in wine school! However wine is one of Israel’s finest quality exports and arguably Israel’s finest ambassador. Reactions like that are rare, especially in Poland where I have many wine connections.

Wine has certainly made me a lot of friends. The people I have met with a glass in hand include right wing settlers from the territories, left wing pacifists from Tel Aviv, ultra orthodox Haredim, Israeli Arabs, Palestinian Christians, not to mention winemakers from Lebanon and Turkey. We have absolutely nothing in common, apart from an interest in wine. So I see wine as a bridge and unifier rather than something divisive. I wish people here would drink more wine than coffee, and then perhaps it would be a calmer place!

Most people in the wine trade believe wine should be separated from politics. You don’t need a flag to grow grapes and wine should be judged on quality. In other words it should be above the fray. The wine from a vineyard in Alsace did not change because it was from France or Germany. It was still the same terroir regardless of the country.

After 130 years of pioneering, it is still wineries and vineyards that are in the center of the Israel discourse. Only recently a prominent right wing politician described those Israelis that did not buy or write about wine from the Territories as enemies of the State and agents of Palestinian propaganda. Others see a difference between Eretz Israel and the State of Israel and refuse to touch a bottle from there. And that is a debate within Israel.

Every restaurant and individual must be allowed to make the decision to buy or not based on personal opinion, as with every consumer product. The freedom of what to buy without harassment is a basic right. Live and Let Live. It is only a drink made from grapes after all! Thankfully, there are enough quality Israeli wineries of every type, from every corner of the country, to provide a great deal of choice, whatever your political persuasion or religious affiliation. However I do not believe in boycotts on principle and believe they drastically weaken the arguments of those that propose them.

Wine continues to be an attraction for the full spectrum of political views, covering every corner of the country, whether disputed or undisputed. So it seems those that want to glorify or vilify Israel, from outside or within, will continue to do so, using wine as the medium. 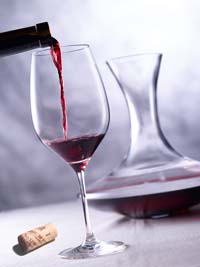 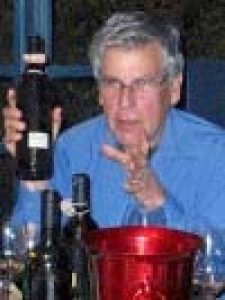 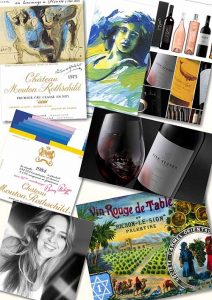 In all the fluff surrounding wine, it will surprise many to know that the label is actually quite modern. The use of a glass bottle,