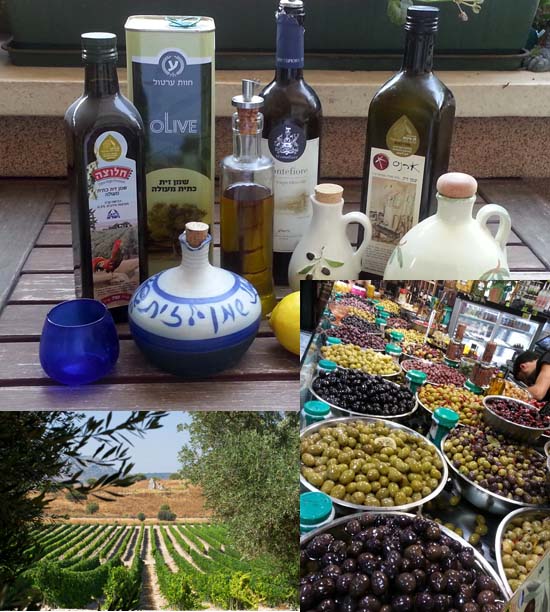 Most Jewish festivals have a wine or wine style associated with them and sometimes the calendar dictates what I write about. When arriving at Hannuka, it was a difficult decision. Do I write about hearty red wines because we are in the winter months, or dry white wines, which will go far better with the fried foods of the festival, like latkes. Instead, I have chosen to write about the product, which is at the center of the Hannuka story. I am referring to olive oil.

I believe it is appropriate for olive oil to appear in a wine article because they are partners and go together like Ginger Rogers and Fred Astaire or Humus and Tehina. They grow together as olive trees and vines in the same climate and conditions, are cultivated in olive groves and vineyards in the same growing regions and appear on the table together as olive oil and wine. Wherever the soil is poor throughout the Mediterranean basin, and nothing else grows, vines and olive trees have always been planted. This is true of all the Mediterranean countries. The humble olive and grape produce super enhanced products, wine and olive oil, which people in ancient times thought were gifts from the Gods.

Olive oil and wine go back to the beginnings of the Jewish people in Israel. Deuteronomy refers to a land of olive oil and wine. Thucydides wrote that the dawn of civilization was when man began to cultivate the olive tree and vine. Today, they together they are the best expression of the Mediterranean diet, and are symbols of the new quality Israeli cuisine. They are the essence of both ancient and modern Israel.

I never forget when I was a young wine buyer in England, a famous Italian winery wanted to give a gift. I was rather hoping for one of the winery’s better wines, but instead was surprised to receive a bottle of their finest olive oil. Only later when I came to Israel and began to appreciate the wonders of olive oil, did I truly appreciate what a special and personal gift it was. I learnt that the pride in a handcrafted olive oil was no less than in a great wine.

The olive was first cultivated in the Levant and Crete virtually simultaneously. From its roots in the areas of Syria, Israel & Lebanon, olive cultivation spread to Turkey, Arabia, North Africa and Spain. The Hebrew word for olive is Zayit, which is similar and the obvious root to the Aramaic Zaita, Arabic Zait, Armenian Dzita, North African Zeit and Spanish & Portuguese Azeite. Those countries using the word olive, trace their roots to Greece, not to the Levant.

The olive tree grew wild in the natural forests of ancient Israel. Olive oil, like wine, was an important commodity for trade & export. There is evidence that olive oil from Canaan was exported to Egypt and Greece over 4,000 years ago. In ancient Israel, olive oil was used for food, cooking, medicine, illumination, cleanliness, cosmetics and for anointing kings or priests during their consecration.

Archaeologists have found a wealth of information from ancient oil presses, storage jars and weights found throughout the country. It is in Israel that the earliest mortars for crushing olives and the oldest surviving vestiges of olive wood were discovered. In the Lower Galilee, they recently found residue of olive oil in clay pots dating back a mere 8,000 years!

The most complete olive oil production center was at Ekron, the Philistine capital, where 114 large olive oil presses were excavated, clearly indicating the size of the olive oil industry in ancient times.

In the Israel of today there are place names evoking the importance of the olive: Beit Zayit, Har Zayitim – The Mount of Olives and Garden of Gethsemane (Gat Shemen – an oil press) are the most famous of these. Even the emblem of the modern state of Israel depicts a menora (an oil lamp candelabra), which in ancient times was lit using olive oil as fuel, with a relief of an olive branch and leaves on both sides.

The Israeli Arab population has always grown olives for food and oil, but in the last 25 years with the development of Israeli food & wine culture, there has been enormous growth in the interest & quality of Israeli olive oil. Today the olive industry really symbolizes Israel because every community, whether Jews, Arabs, Druse or Circassians, are involved in the cultivation of olives.

Israel has a Mediterranean climate, so much of the country is suitable for the cultivation of olive trees. Olive groves cover Israel from the mountains of the Galilee to Revivim & Neot Smadar in the Negev and from the coast in the west to the hills of the east.

The biggest concentration of olive groves still lies in the Galilee, northern Israel. The Lower & Western Galilee are arguably the most famous areas for olive production. However the valleys surrounding Mount Carmel, the Sharon Plain, the Golan Heights, Judean Hills and central Negev are all now sites for the production of quality olive oil.

Unlike wine, where most of the grape varieties are international, even global, the olive varieties are more indigenous. The Souri, which is sometimes referred to as the Suri or Syrian olive, is the main local variety, particularly popular in the Galilee. It is one of the oldest varieties in the world – thought to have originated in the Lebanese town of Sur (Tyre). It is a small, oval olive producing an aromatic, piquant olive oil, which is green, peppery with a hint of honey.

Barnea is a variety developed in Israel by Professor Shimon Lavie. It has become an international variety planted in Australia & Argentina. This small, oblong olive is easy to grow, providing good yields and can be planted densely. It produces a sweeter, delicate olive oil with a light fruity taste and an aroma of mown hay.

The Nabali Baladi originated in Nablus. The improved Baladi, known as Mohsan, was introduced to Israel from the Arabs of Judea & Samaria after 1967. A larger olive than the Souri, it is easier to cultivate, and gives good yields. It is more neutral than the Souri & Barnea.

Apart from these, there a host of international varieties are also grown in Israel. These include Manzanilla and Picual from Spain, Novo & Leccino from Italy, Fishulin from France and Kalamata from Greece, and many others.

Strict quality controls are maintained by the Israel Olives Board. Only olive oils which pass their stringent tests are able use the special sticker for ‘Quality Approved Israeli Olive Oil’.

Olive oils are tasted in a similar way to wine. The reverence is the same and the vocabulary is similar. The vagaries of the climate, choice of variety and date of harvesting can affect the final product, just like wine and olive oil should be stored in a cool dark place, which is how wine should be stored.

Olive oil is so central to the Mediterranean diet that it is no surprise that it should strongly feature in an Eastern Mediterranean country like Israel. Israelis love to cook with olive oil. A fresh fish is likely to be grilled with only fresh herbs & olive oil added. In the quality restaurants, olive oil is used to enhance carpacchio or simply drizzled onto bread. A small dish of olive oil may appear on the table in place of butter. At home it will be enjoyed with hummus or labane. Pita bread dipped in olive oil and za’ater, the herb of Israel, is a popular breakfast in the region.

On salads, Israelis will add olive oil, lemon juice & parsley, instead of the traditional European salad dressing of oil & vinegar. Whereas in the southern Mediterranean the custom is to use olives in the cooking, in the eastern Mediterranean, olives are presented as a starter or as part of a mezze served on a number of small plates in the center of the table. In its love of olive oil & olives, Israel is no different from other countries in the Eastern Mediterranean, like Greece & Turkey.

Israseli olive oils are considered to be more aromatic, characterful & strongly flavored than the more delicate European olive oils. I recommend this Hanuka you pay homage to this elixir by lighting you Hannukia with olive oil for a more authentic festival experience. Of course, with a glass of wine nearby! 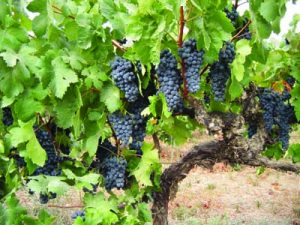