One of the seminal events that marked the development of the kosher wine industry took place exactly thirty years ago. This was the production of the first Rothschild kosher Bordeaux wine. Until then most kosher wine in France was simple, inexpensive and more prized for its hechsher than its quality.

At this time a young Jewish guy called Pierre Miodownik, of Polish parents, was becoming frustrated at the lack of quality of the wine he drank and dreamed of producing quality kosher wine. He knew it was possible if he had the right opportunity. He lived in the Languedoc. It was scarcely a center of the Jewish community, nor was it then known as a place for quality wine.

Miodownik had slipped into wine because it was all around him. Languedoc was even then one of the largest producing wine regions. As a religious Jew, he became involved in making kosher cuvées to supply demand, but with no pretention to quality. He knew the wines were not great, and sought a way of doing better. This quiet, slightly diffident, unassuming Frenchman then got the opportunity of his life. He was put in contact with Baron Edmond de Rothschild himself.

However the family’s immense support of Israel continued. The grandson with the same name also benefited Israel by founding the Caesarea Rothschild Foundation. Furthermore, Yad Hanadiv helped to build the Knesset, the new Supreme Court Buildings, the Mishkenot Sha’ananim Music Center and a current project is the National Library. The contributions are endless.

Baron Edmond the younger, was a part owner of Château Lafite Rothschild. His cousins, stemming from the English branch of the family, owned Château Mouton Rothschild. These are two of the great Bordeaux Châteaux, purchased by the family in 1868 and 1853 respectively.

When Baron Edmond decided also to enter wine, he had an opportunity to buy Chateau Margaux, another of the great French wineries, but instead decided to be a wine pioneer and to create. He went for Cru Bourgeois instead of Premier Cru Classé and purchased Château Clarke in the more unfashionable, comparatively unknown region of Listrac in the Medoc, Bordeaux. He invested a fortune in Château Clarke. The estate was modernized, the vines replanted, and the wines improved no end. He succeeded in bringing this region, and that of Moulis, to the attention of wine lovers.

This was the opportunity young Pierre sought. The Baron empowered him and told him to do it, whatever it took.

So they produced a wine called Barons Edmond de Rothschild Haut Medoc from the 1986 vintage. It was not inexpensive, carried the Rothschild name and was from Bordeaux. It was watershed wine in the niche world of kosher. After this it became more fashionable for famous Châteaux in France to produce kosher wine. However though many of those who have dabbled in kosher wine do not make it every year, the Rothschild wine continues to be made, year in, year out, not missing a vintage.

Pierre Miodownik went on to become the most revered kosher winemaker in Europe, and Baron Rothschild continued to produce high quality, fine wines in the general wine world through his wine company, which was called Companie Vinicole Baron Edmond de Rothschild (CVBER).

The CVBER today owns the Bordeaux Châteaux in the up and coming regions of Listrac and Moulis. Châteaux Clarke (Listrac) and Château Malmaison (Moulis) were purchased in 1973, followed by Château Peyre-Lebade in 1979.

After Baron Edmond passed away in 1997, his son Baron Benjamin and wife Baroness Ariane continued the growth of the company with a joint venture in South Africa with Anton Rupert (Rupert & Rothschild) in 1997 and in Argentina with Laurent Dassault (Flechas de los Andes) in 1999.

They then returned to Bordeaux to purchase Château des Laurets in Puisseguin-St. Emilion. This was followed by the founding of Macan in Rioja, a joint venture with Vega Sicilia, the greatest name in Spanish wine, and Rimapere in 2012, in partnership with Craggy Range in Marlborough New Zealand.

CVBER is a well-run company with a fascinating list of wineries, each producing some very high quality, authentic regional wines, which remain true to their origins and local terroir. Despite their immense contribution to Israel and to Israeli wine, unfortunately they have not yet made the leap to having a joint venture or partnership with an Israeli winery. However they list some serious wines for serious wine people, which are well worth seeking out.

The latest initiative has been a joint venture between the three great Rothschild wine houses in production of a high quality Champagne called Champagne Barons de Rothschild. This includes a kosher cuvée.

CVBER continue to remain loyal to Baron Edmond de Rothschild’s wish to make quality kosher wine. To make a kosher wine in a non-kosher winery can be costly in terms of time and money. Quite frankly it can be a nuisance to an efficient winery. Yet to her credit, Hélène Combabessouse, the Commercial Director of CVBER, who must be frantically busy all the year round, can be found at most of the large annual kosher tastings whether in London, New York or Tel Aviv. She faithfully presents the kosher portfolio, with patience, a smile and a certain French elegance. It really does show a real commitment to the Jewish community and kosher wine, that CVBER have continued to serve this niche market for the last thirty years. 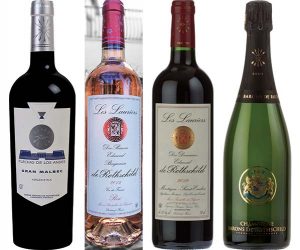 The kosher wines produced by Compagnie Vinicole Baron Edmond de Rothschild are distributed by Royal Wine and Kedem Europe. The wines I tasted were as follows:

Champagne Barons de Rothschild NV
A kosher cuvée was made of the new champagne…..and this really is a fine result. It has some good toastiness on the nose, with a touch of brioche, a creamy acidity and a very refreshing finish. Without doubt this is one of the best kosher sparkling wines out there.

Les Lauriers Des Barons Edmond Benjamin Rothschild Rosé 2014
Made 100% from Merlot. It has an onion skin pink color, with very delicate berry aromas balanced with a sharp and refreshing acidity. An ideal aperitif.

Les Lauriers Des Domaines Edmond de Rothschild 2013
This wine is mainly Merlot balanced by Cabernet Franc and a little Cabernet Sauvignon. The wine is deep red in color, with ripe plum and black berry on the nose with soft tannins and effect of oak aging nicely integrated.

Barons Edmond Benjamin de Rothschild Haut Médoc 2013
The Rothschild Haut-Médoc is made 65% from Merlot and 35% from Cabernet Sauvignon. It is really the second wine of their three estates Clarke, Malmaison and Peyre-Lebade. Medium to full bodied with good black berry and blackcurrant notes, quite soft in the mouth with a pleasing finish.

Flechas De Los Andes Gran Malbec 2013
This is my favorite. A 100% Malbec which is full of up front fruit, with a mouth filling flavor, vanilla notes from the oak and a long satisfying finish. A great mouthful of wine. To the question how many wineries are there in Israel, it is very hard to give a concrete answer. I know that the largest three This article first appeared in the Jerusalem Post Magazine. Sparkling wine is the wine of fashion, partying and celebration. Whether on New Year’s Eve, at